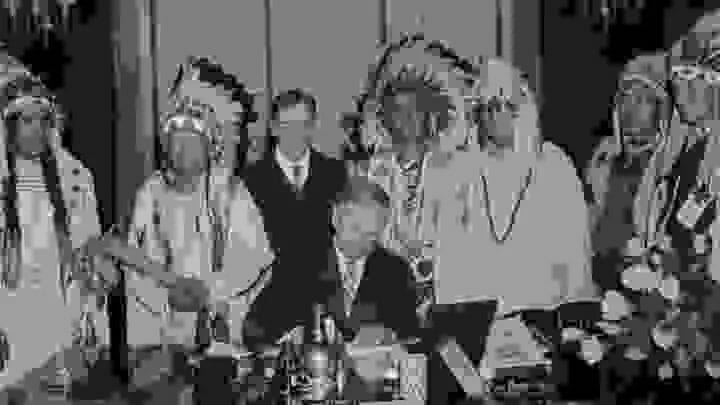 There was a serious attempt, in the 1930s, to make amends for the way the United States Government had historically treated the Native Americans. In the wake of the changes brought on by President Franklin Roosevelt’s New Deal, many of the same socioeconomic changes were attempted on Indian reservations.

This was, in many respects, a sincere effort to right the wrongs done to the Indians and to ensure their survival during a devastating economic period.

The Provisions of the 1934 Act

The federal Department of Indian Affairs, under the direction of its commissioner, John Collier, launched what was known at the time as Wheeler-Howard Act. We call it the Indian Reorganization Act today, and its purpose was to give the Indians additional land rights, involve them in future policy that would pertain to them, set up officially recognized governing bodies within the tribes and stop the forced assimilation of Indians into non-Indian society.

The act would reorganize the government within the Indian tribes, setting up a standardized constitutional governing structure very similar to what the U.S. Government already had in place. This was supposed to give them more autonomy. The Indian Reorganization Act would also produce some public works programs, such as building fences, digging wells, creating roads and establishing ranches.

The noble goals of the act were met with some contention by Congress and various states. Some states resented that power was being taken away from them in what they considered to be an unconstitutional manner. Many in Congress were perfectly happy with how the Indians were being treated already and didn’t want to see anything change or they wanted to see things go in a different way.

The act was also met with some opposition by a number of Indian tribes as well. Most of them were upset that they had no say in actually putting together the act’s key provisions or informing its policy. Once again, they felt they had been relegated to the sidelines and helpless to influence how the U.S. Government would handle Native American policy. They wanted to have input in matters that directly affected them, and despite the promise of changing that for the future, it hadn’t been achieved during the birth of this legislation.

The act’s approval hinged on the Native American vote, and a number of the tribes were disturbed by the way the act sought to change the way they governed themselves. In some aspects, the U.S. would retain significant control over critical matters, and that didn’t sit well with many existing tribal governments.

There was also the matter of deciding how votes were to be cast within the new policy. The tribes had different ways of deciding votes, and the whole process was not as cut and dried as what the new legislation was designed for.

The Navajo and the Standing Rock Sioux both mistrusted the U.S. Government and the Bureau of Indian Affairs. They rejected much of the Indian Reorganization Act and refused to undergo reorganization under its stipulations. Later, they would take up a constitutional form of government.

The Act Gives Way to Changes

This legislation started a wave of economic changes to the reservations. One of the most notable ones was the construction of the Oahe Dam. This action was strongly opposed by the Standing Rock Sioux Council, but they were powerless to do anything about it, and their objection were ignored. As a result of the dam, many of the Sioux had to leave the area and relocate to somewhere safer. Many of their rangelands were flooded, and about a quarter of those living on the reservation had to move somewhere else as a result.

The act did change the authority over sales, and Indians were now allowed to make their own sales. Before, the Indian Affairs office governed most sales on Indian lands, and they tended to sell livestock and goods at below market prices, causing many Native Americans to lose money. With the advent of the new legislation, this was no longer an issue, and the Native Americans were free to sell their goods as they saw fit.

This brought on great economic prosperity to many people living on reservations. It allowed a number of Indian tribes to survive a harsh economic climate they otherwise probably would not have.

Over time, this law gave way to make room for new ones and the dispute arising from some of the Indian Reorganization Act’s more contentious elements actually paved the way for new legislation. A few new laws, such as the Indian Self-Determination and Education Assistance Act as well as Public Law 93-638 relegated the Bureau of Indian Affairs to what was essentially an advisory capacity. They no longer had direct jurisdiction in Indian matters, and more autonomy was given to the tribes. The tribes were now able to create and control programs that the Bureau of Indian Affairs had previously operated.

The Legacy of the Act

History views the Indian Reorganization Act as something of a mixed bag. On the one hand, it did pave the way for some important changes and brought on some long overdue benefits for the Indian people. On the other hand, even though it was stated that the law was an attempt to end Indian assimilation and increase Indian autonomy, it stumbled on both of those promises. There was still the problem of too much control being held by the Bureau of Indian Affairs.

The mastermind behind the act, Indian Affairs Commissioner Collier, was a contentious figure as well. To some Indian people he was a hero, but to others he was quite the opposite. He actually developed an antagonistic relationship with the Navajo people that cast a shadow over the intentions of the act and that hindered the ability of the U.S. Government and the Indian tribes to make the kinds of advances they should have been able to with this new legislation.

The law also lacked any Indian voices at all in its conception. It seems obvious in hindsight that it would have been more widely accepted among the tribes if it had benefited from some Indian input.