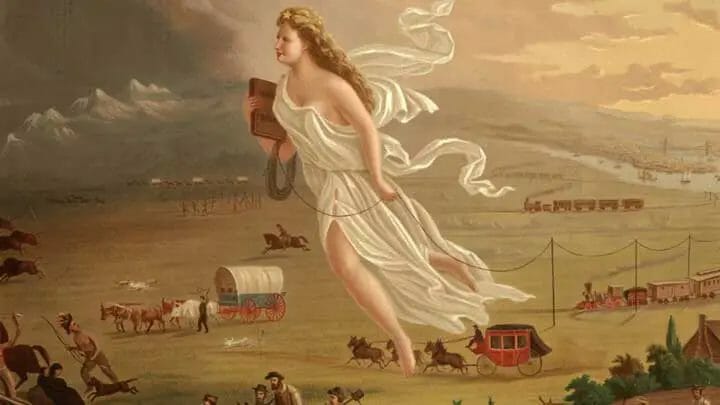 The title “Manifest Destiny” is a term created by newspaper editor to John O’Sullivan to describe a modus operandi of at least one significant segment of the U.S. Government and the American people during the 19th century. It describes the belief that the United States and its people had the God-given mandate to pursue westward expansion, suppressing opposition and taking ownership of the land all the way to the Pacific Ocean.

[amalinkspro type=”image-link” asin=”0803215983″ new-window=”true” apilink=”https://www.amazon.com/dp/0803215983?tag=amindcoc-20&linkCode=osi&th=1&psc=1″ addtocart=”false” nofollow=”true” alt=”Native America, Discovered and Conquered: Thomas Jefferson, Lewis and Clark, and Manifest Destiny” alignment=”alignright”]https://m.media-amazon.com/images/I/51q55fX2G+L.jpg[/amalinkspro]In some ways, the hubris of western expansion grew from the famous congressional address in 1823 of President James Monroe which became known as the Monroe Doctrine. It outlined the U.S. claim to the West, warning all European powers that no interference would be tolerated.

As early as the Monroe presidency, America had determined that first nations people were nothing more than an indigenous nuisance to be managed by edict. Anyone with a passing knowledge of U.S. history knows that this westward push forcibly relocated many Eastern Indian tribes across the Mississippi.

Policy decisions like the Indian Removal Act relegated them to swaths of land called reservations, where they were promised that they would live fairly independently and out of the way of the U.S. expansion (this was famously untrue). Of course, not every American Indian tribe moved peacefully to these lands, nor were many willing to simply get out of the way as the American settlers made their way west.

The Roots of Hatred

The Native Americans were seen by the white colonists as sinful savages, less than human and deserved to be treated as such. To the average white American, all the disparate tribes were as one people, unified by their wickedness and practices, which notably did not include worshiping the same God that many believed would bless western conquest.

Politically, they treated the tribes as independent nations, or more literally, foreign sovereign nations. All Indian policy was crafted as though Native Americans were foreigners trespassing on lands that belonged to the white colonists.

The United States as a nation saw itself as God’s own chosen people. They thought of themselves as the modern day Hebrews, doing the work of their God and fulfilling a sacred destiny by spreading their power throughout the continent. This meant that they had to move across the continent. Taking it over was their divine right, and no natives could stand in their way.

It was a blusterous and arrogant attitude, but one that a large number of Americans shared, though they certainly didn’t have a name for it at the time. They simply knew that they should be the ones to conquer and claim the continent, and this led to a marginalization of the native people.

The notion of the Native Americans as somehow less worthy than the white settlers of inhabiting the continent led to a portrayal of them in popular culture of the time as literal demons. The dime store novels, the newspaper articles and the tall tales told in saloons and around campfires all painted the Indian as something not quite human, the same way the African descendant was portrayed as sub-human at the time.

This made it easy to justify subjugating and enslaving many native people as well as killing them outright. The U.S. Government has a long and bloody history of dealings with the Native Americans, often reneging on treaties simply because they did not agree with their idea of U.S. supremacy.

In one instance, Tecumseh led 400 warriors to meet General William Harrison in response to white settlers moving onto his people’s lands. He said that even though the U.S. Government had signed a treaty with another tribe in the area, that tribe did not and could not speak for all tribes.

The land that had been sold to the U.S. Government belonged to many tribes, and it was wrong to abide by the treaty. He urged the general to rescind the treaty and give the lands back to the native tribes.

The general refused, and a vicious battle broke out, becoming one of the sparks that started a series of hostilities between the U.S. Government and native tribes in the area. To General Harrison and many of Americans, it seemed a foreign and frankly wrong idea to give up what was supposedly their birthright. They always looked to move forward and claim more, often at the expense of the native people.

This mindset of U.S. superiority made it easy to spread lies about the Native Americans. Stories spread that they murdered countless settlers who passed close to their lands and that raiding parties often went out and murdered helpless women and children by the dozens.

This was a lie perpetuated throughout U.S. history and in popular culture. The brutal savagery of the American Indians was often a trope of the western movie genre, based on outright lies and stereotypes.

In actuality, of the 400,000 settlers that moved westward during the period where tensions ran high between Indians and white colonists, only about 400 settlers were killed by the natives. While occasional attacks did occur, they tended to come only after provocation and were certainly not a method of operation employed by most native tribes.

The Continuing Impact of Manifest Destiny

While no majority still believes in manifest destiny today, the effects of this mindset are still evident. Looking at the reservations where many Indians live, there is often widespread poverty, rampant disease, poor housing conditions and a lack of resources.

This is what decades of treating native people like second class humans has resulted in. They were often forgotten or brutally savaged over the years, robbed of resources and rights and often left to wither away on their own.

Looking back on history, it’s obvious that the U.S. Government was the aggressor and its soldiers perpetrated the most savage atrocities. It’s an inconvenient truth, setting things in perspective but not set them right. There is still a mass of perpetuated and harmful stereotypes of Native Americans that find their way into popular culture today.

The impact of manifest destiny is far more severe than some fictional characters, however. The Native American people have never fully recovered from the wrongdoings they suffered at the hands of the U.S. Government.

The Monroe Doctrine, and its related concept of manifest destiny, exacted a tremendous long-term cost. Westward expansion was achieved, but at the price of a great black mark upon the legacy of the United States and the lingering impoverished state of the American Indian.

Homelands wrecked, burial grounds desecrated, sustained poverty, countless non-combatants killed… these represent the devastation wreaked upon those first nations inhabitants who had a rightful claim to much of what became the United States.

It is said that the amount of time a wrongdoing was committed requires just as much time, if not more, to set right. There are still many, many years to go to make right what was done wrong to the Native Americans through manifest destiny.